Latest news on Russia and the war in Ukraine 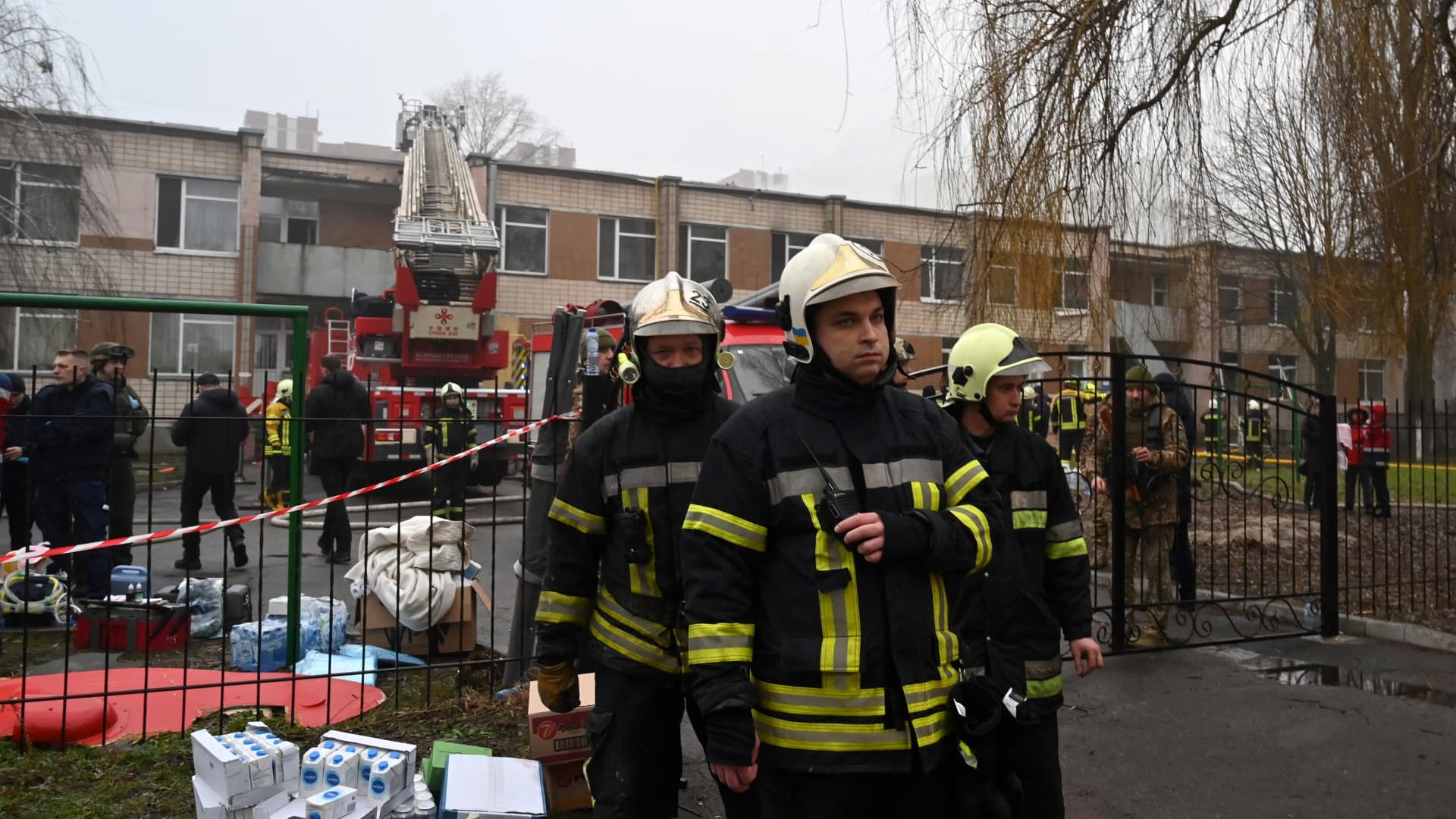 The number of victims from a helicopter crash near Kyiv that has killed Ukraine’s interior minister and other top-ranking officials has risen to 18.

As of 10:30 a.m. local time, there are 18 people known to have died, including 3 children, the head of Kyiv’s Regional Military Administration Oleksii Kuleba said Wednesday.

He said around 29 people, including 15 children, were known to have been wounded in the crash, that took place next to a kindergarten and residential building. All emergency services are at the site of the crash, he said.

Tributes to the victims have begun with an advisor to one of the victims, Interior Minister Denys Monastyrskyi, posting his condolences on Twitter.

“My colleagues, my friends. What a tragic loss. Deepest condolences to their families.”

The helicopter belonged to Ukraine’s state emergency service, according to the national police chief Ihor Klymenko.

The leadership of Ukraine’s Interior Ministry are reported to have died in a helicopter crash in the town of Brovary near Kyiv, on Wednesday.

“This morning, on January 18, a helicopter of the State Emergency Service crashed in Brovary.  As a result of the crash, the leadership of the Ministry of Internal Affairs died: the minister, the first deputy minister and the state secretary,” the head of the National Police of Ukraine Ihor Klymenko said on Facebook.

The helicopter reportedly fell near a kindergarten and a residential building in the town, with Klymenko saying that 16 people are known to have died, including two children. Nine of the fatalities were on board the helicopter.

Twenty-two victims are in hospital, including 10 children, Klymenko said.

“All specialized and specialized services work on site.  The inspection of the scene is ongoing.”

Russian President Vladimir Putin could be ready to announce another round of mobilization as Russia looks to beef up its armed forces in Ukraine.

“Putin may announce a second mobilization wave to expand his army in the coming days — possibly as early as January 18,” analysts at the Institute for the Study of War said Tuesday.

The analysts noted that Kremlin spokesperson Dmitry Peskov announced on Tuesday that Putin will deliver a speech in St. Petersburg (Putin’s hometown) today in commemoration of the 80th anniversary of Soviet forces breaking the Nazi siege of Leningrad.

“Putin is fond of using symbolic dates to address the Russian people, and some Russian pro-war milbloggers noted that he will seize this opportunity to either declare mobilization or war with Ukraine,” the ISW analysts said in their daily analysis of the Ukraine war.

Last Friday, Ukrainian intelligence officials said they believed that preparations for a second wave of mobilization were underway.

During the first wave of mobilization, 300,000 people were drafted in Russia. After short training, they were sent to the combat zone in Ukraine.

Ukraine’s military intelligence does not rule out that the leadership of Russia will announce another wave of mobilization in the coming days. Another 500,000 Russians will be drafted.

Russia should not be left out of international system after war, Kissinger says

Former US Secretary of State Henry Kissinger attends a luncheon at the US State Department in Washington, DC, on December 1, 2022.

Former U.S. Secretary of State Henry Kissinger on Tuesday said Russia must be given the opportunity to one day rejoin the international system following any peace deal in Ukraine and dialogue with the country must be ongoing.

“This may seem very hollow to nations that have been under Russian pressure for much of the Cold War period,” Kissinger told the World Economic Forum in Davos, Switzerland, via video link.

However, he said it was important to avoid an escalation of conflict between Russia and the West as a result of it feeling the war had become “against Russia itself.”

This, he said “may cause Russia to reevaluate its historic position, which was an amalgam of an attraction to the culture of Europe and a fear of domination by Europe.”

“The destruction of Russia as a state that can pursue its own policies will open up the vast area of its 11 time zones to internal conflict and to outside intervention at the time when there are 15,000 and more nuclear weapons on its territory.”

Kissinger also said he believed Ukrainian membership in NATO would be an “appropriate outcome” one day, having previously caused a controversy by suggesting that the country should be prepared to cede territory to Russia in order to achieve peace.

Kissinger said Tuesday that the U.S. should continue to provide military support and if necessary intensify that support until a cease-fire line is reached or accepted in preliminary discussions. He also expressed admiration for Ukrainian President Volodymyr Zelenskyy and the “heroic conduct of the Ukrainian people.”

Chancellor Scholz with Singaporean ministers ahead of his speech on Monday.

U.S. President Joe Biden spoke with German Chancellor Olaf Scholz about ways to aid Ukraine, according to a White House readout of the call.

“The leaders discussed their steadfast support for Ukraine and condemned Russia’s aggression,” the readout added.

Earlier in the day, Scholz named Boris Pistorius as Germany’s next defense minister after Christine Lambrecht resigned Monday over criticism of her handling of the slow supply of offensive weapons to Ukraine.

Sanctions against Russia have not brought the country’s economy to its knees or ended the war so should stop, Péter Szijjártó, Hungary’s minister for foreign affairs, told CNBC.

Read more on this story here

A combine harvester of Continental Farmers Group agricultural company harvests wheat on August 4, 2022 in the Ternopil region of Ukraine.

Solskyi said that the corn that remains on the stalk will deteriorate up until harvest, according to an NBC News translation.

He added that about 85% of the country’s corn has been harvested so far.

Rescuers search for people trapped under the rubble of a high-rise residential building hit by a missile on Jan. 14, 2023, in Dnipro, Ukraine.

The White House called Russia’s bombing of a missile strike on a residential building in the Ukrainian city of Dnipro “brutal and barbaric,” and a violation of international humanitarian law.

“We will continue our work to hold Russian forces accountable,” White House press secretary Karine Jean Pierre said of the attack, which killed at least 40 people and wounded many more.

Pentagon spokesman U.S. Air Force Brig. Gen. Pat Ryder also condemned the attack, but declined to say whether the missile that hit the residential building was a hypersonic weapon.

Finnish Prime Minister Sanna Marin says that if Russia were to win the war in Ukraine, it should send the message that invading another country leads to gains of land or natural resources.

She says Europe and other Western democracies should send Putin the message that “we will support as long as needed — five years, 10 years, 15 years, whatever it takes — we will support Ukraine, and this will not stop.”

She says “the story might have been very different” if Western allies had acted stronger when Russia illegally annexed Ukraine’s Crimea peninsula in 2014. The European Union member that shares a long border with Russia is seeking NATO membership.

Marin says Finland believed it was best to stay out of the alliance for its own security but then it saw “Russia is attacking another neighbor and we cannot rely on that relations anymore, so we have to seek partnership elsewhere.”

All 30 NATO states must approve Finland and Sweden joining the Western military alliance, with just Turkey and Hungary yet to sign on. Turkey is demanding the Nordic countries tighten counterterrorism measures.

A former commander of Russia’s Wagner mercenary group who fought in Ukraine said he has fled to Norway and is seeking asylum in fear for his life after witnessing the killing and mistreatment of Russian prisoners brought to the frontline.

Andrei Medvedev, who joined the group on July 6, 2022, on a four-month contract, said in a video posted by the Gulagu.net rights group that he had crossed the border into Norway before being detained by Norwegian police.

Medvedev, an orphan who joined the Russian army and served time in prison before joining Wagner, said he had slipped away from the group after witnessing the killing of captured deserters from Wagner.

General view of the “PMC Wagner Centre”, associated with the founder of the Wagner Group, Yevgeny Prigozhin, ahead of its opening in Saint Petersburg, Russia October 31, 2022.

“I am afraid of dying in agony,” Medvedev told Vladimir Osechkin, founder of the Gulagu.net rights group, which said it had helped Medvedev leave Russia after he approached the group in fear for his life.

He said he crossed the border, climbing through barbed-wire fences and evading a border patrol with dogs, and heard guards firing shots as he ran through a forest and over thin and breaking ice into Norway.

Norwegian police said a foreign citizen had been arrested on the night of Thursday to Friday after illegally crossing the Russian-Norwegian border in the Arctic and was seeking asylum.

His Norwegian lawyer said Medvedev was now in the “Oslo area” but did not give details.

“What is important for him (Medvedev) is that immigration authorities clarify his status as soon as possible,” lawyer Brynjulf Risnes told Reuters.

Medvedev had not yet talked with Norwegian security police and no agreement for an interview had been made, Risnes said. “I am sure that will be a question at some point,” said Risnes, who declined to say where Medvedev was fighting in Ukraine.

“He says he has taken part in battle, which he says were clear battle situations … and that he has not been in contact with civilians,” said Risnes.

“Sanctions have some impact on the Russian economy. Sometimes our expectations are higher than [the] real result but it does not mean that sanctions are not effective. They are effective but with a certain time lag,” Nausėda told Joumanna Bercetche.

“Of course the success of Ukraine’s armed forces in the battlefield are just critically important,” Nausėda said, calling for the provision of better air defense systems and tanks to the country.

He also discussed the difficulty of Ukraine getting NATO membership in the near-term due to the ongoing conflict and the need for the alliance to find “guarantees” for the country without membership; and Lithuania’s commitment to strengthening its own armed forces and increasing military spend to 3% of GDP.