McCarthy’s plea, and begging for votes 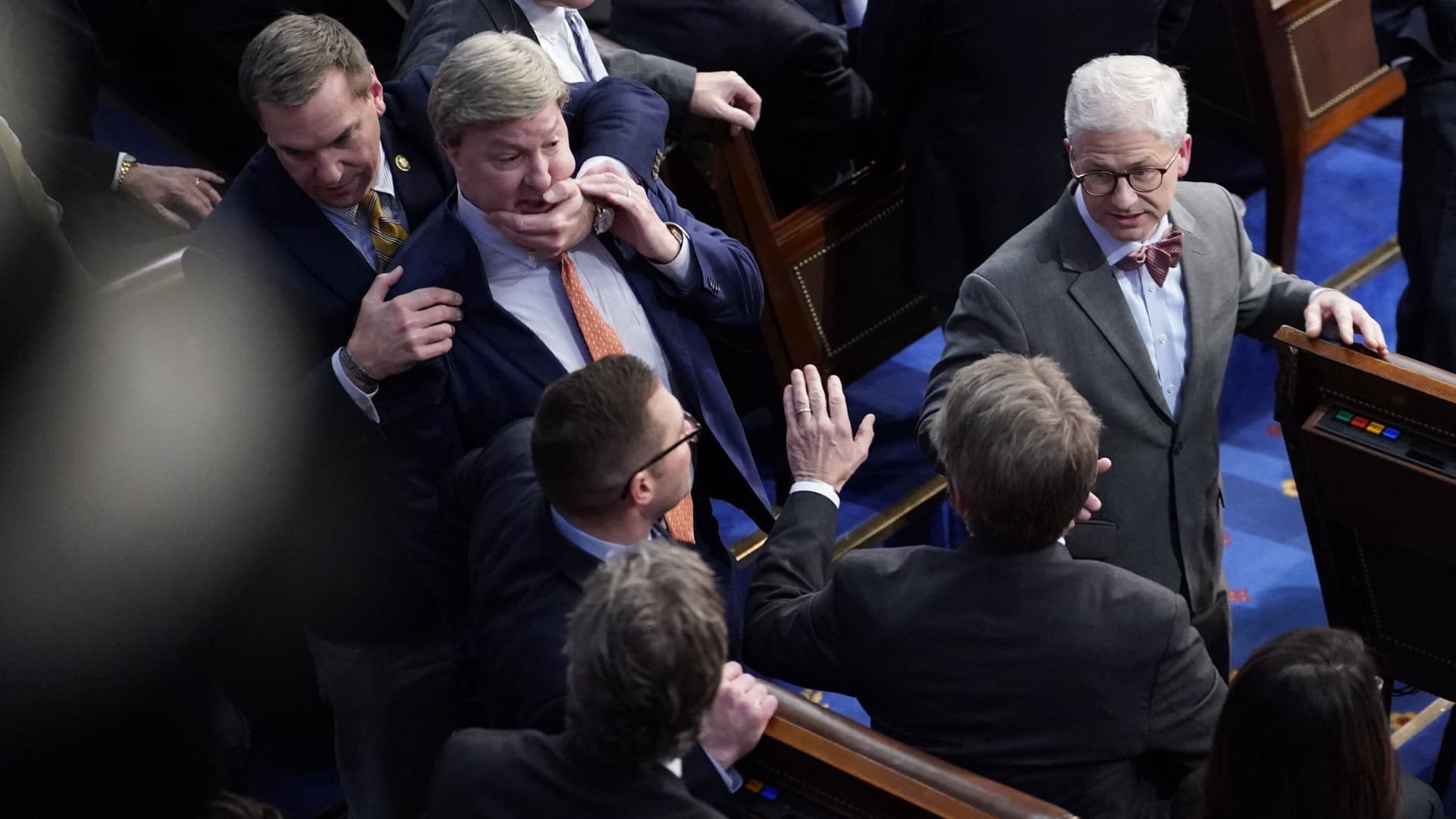 Washington , D.C. – January 6: Mike Rogers (R-AL) is restrained after getting into an argument with Matt Gaetz (R-FL) during in the 14th round of voting for speaker in a meeting of the 118th Congress, Friday, January 6, 2023, at the U.S. Capitol in Washington DC. The House reconvened Friday night after adjourning earlier for a fourth day of voting after Rep.-elect Kevin McCarthy failed to earn more than 218 votes on 11 ballots over three days. (Photo by Jabin Botsford/The Washington Post via Getty Images)

It was the extraordinary moment that brought House Republicans to the brink — and ultimately the moment they found their way back.

Just one vote short of becoming speaker of the House, California Republican Kevin McCarthy stood from his chair and walked down the center aisle to the back of the chamber. It was nearing midnight, and he had already lost 13 votes for speaker over four long days. The room fell almost silent as it became apparent that the GOP leader was now asking — begging, really — the bombastic, blustering, defiant Florida Rep. Matt Gaetz to change his vote from “present” to “McCarthy.”

U.S. Rep.-elect Matt Gaetz (R-FL) (L) talks to House Republican Leader Kevin McCarthy (R-CA) in the House Chamber during the fourth day of elections for Speaker of the House at the U.S. Capitol Building on January 06, 2023 in Washington, DC.

Gaetz, who had hurled personal insults at McCarthy just hours earlier on the House floor, said no.

McCarthy slowly walked back down the aisle, alone, head tilted to the ground. But he turned back around when he heard a scuffle behind him. Alabama Rep. Mike Rogers, a Republican ally of McCarthy, had angrily confronted Gaetz, telling him he would regret his decision. Lawmakers on the floor yelled in disbelief as Rogers was held back by a colleague.

WASHINGTON, DC – JANUARY 06: U.S. Rep.-elect Matt Gaetz (R-FL) talks to John Leganski, Deputy Chief of Staff for House Republican Leader Kevin McCarthy (R-CA), as McCarthy stands next to him in the House Chamber after Gaetz voted present during the fourth day of voting for Speaker of the House at the U.S. Capitol Building on January 06, 2023 in Washington, DC.

McCarthy walked back to make sure the argument was over and then returned to his chair, defeated.

Then tempers cooled. And within the hour, McCarthy and his allies had persuaded his other remaining opponents to vote “present” as well, lowering the vote total necessary for McCarthy to win and handing him the speakership by early Saturday morning — after a historic, remarkable and somewhat astonishing week of repeated votes.

“I hope one thing is clear,” McCarthy said when he finally took the gavel after 1 a.m. “I never give up.”

WASHINGTON, DC – JANUARY 06: U.S. Rep.-elect Mike Rogers (R-AL) (C) is restrained by Rep.-elect Richard Hudson (R-NC) after getting into an argument with Rep.-elect Matt Gaetz (R-FL) in the House Chamber during the fourth day of elections for Speaker of the House at the U.S. Capitol Building on January 06, 2023 in Washington, DC.

The chaos on the House floor came exactly two years after the Jan. 6, 2021, Capitol insurrection. During a late-night session after that attack, McCarthy called it the “saddest day I’ve ever had” as a member of Congress. In the days afterward, McCarthy blamed then-President Donald Trump for encouraging his supporters who attacked the building and interrupted the certification of President Joe Biden. But just a few weeks later McCarthy traveled to see Trump in Florida and made amends.

The scene Friday was a different kind of chaos — but it was a full-circle moment for Republicans, who had ceded both chambers of Congress and the presidency to Democrats after the violent insurrection. While many of them denounced Trump at the time, McCarthy’s Florida visit brought him back into the fold, and the former president was working the phones Friday evening, calling Gaetz and the other holdouts.

“He was with me from the beginning,” McCarthy said after the final vote, noting Trump’s phone calls as well.

While the U.S. House is often raucous, the week’s events were almost surreal: vote after vote, defeat after defeat, and eventual success after picking off seemingly intransigent opponents.

U.S. Rep.-elect Matt Gaetz (R-FL) looks at House Republican Leader Kevin McCarthy (R-CA) after Gaetz voted “present” in the House Chamber during the fourth day of elections for Speaker of the House at the U.S. Capitol Building on January 06, 2023 in Washington, DC.

McCarthy needed two more votes going into the Friday evening tally, which didn’t start until 10 p.m., late enough to provide two of his supporters — one whose wife had given birth that week and another who was ill — time to return to Washington. McCarthy and his allies seemed confident walking in, but as the votes ticked off, it became clear he would be one short.

Two of McCarthy’s closest lieutenants, North Carolina Rep. Patrick McHenry and Louisiana Rep. Garrett Graves, sat on either side of Gaetz during the vote, with Graves at one point on his knees. But Gaetz could only be partially swayed, and stood to say “present” when the roll call reached his name. It wasn’t enough, and McCarthy approached him just before the vote was called, C-SPAN cameras tracking his short journey.

Gaetz was angrily pointing at McCarthy during the conversation. But Colorado Rep. Ken Buck, a McCarthy supporter who was standing nearby, said the exchange between the two men was pleasant, and that McCarthy just asked him to change his vote. Gaetz said his “present” vote was as far as he was going, Buck said.

McCarthy said afterward that Gaetz eventually “got everybody there to the point that nobody voted against me,” persuading some of his fellow colleagues to vote “present” as well. In the end, no Republican voted against McCarthy.

They wanted to “make this conference united and work together,” McCarthy said.